Slaine reigns over the Middle East in Boston at his â€œKing Of Everything Elseâ€ album release.

A king has his scepter and Slaine has his microphone. Slaine proved once again why he is one of Bostonâ€™s most well known hip hop artist and why he is a King in his own right. Slaine played a mix of songs featuring crowd favorites â€œGetting Highâ€, â€œDope Headâ€ and â€œBobby Be Realâ€. Slaine was joined on stage by other collaborators throughout his performance including Special Teamz and Rite Hook .

Slaine knows doors donâ€™t open themselves. Opportunity is made, not given. A Rapper, an actor, and an all around hustler, Slaine makes his own rules as a master of many games.

Slaine grew up in Boston and has spent time in New York and Los Angeles. Slaine received recognition from with his first mix tape â€œThe White Main Is The Devilâ€ (white man referring to cocaine) and gained notoriety when he joined the super group La Coka Nostra (LCN). LCN include ex House of Pain members Danny Boy Oâ€™Connor and DJ Lethal along with ex Non Phixion member Ill Bill along with collaborations and guest appearances from artists like Snoop Dogg and Cyprus Hillâ€™s B-Real. Slaine is also part Special Teams, another collaboration with Jaysuan and Edo G.

Slaine started kicking with both feet as he jumped into acting in 2007 playing the roles of Bubba Rogowski in â€œGone Baby Goneâ€ and Gloansy in â€œThe Townâ€ in 2010. Both feature films included songs by Slaine and one by Special Teamz.

Slaineâ€™s songs embody the grimy underdog, the street, and people who have written off their own lives. Slaineâ€™s writing is known to be dark and aggressive and focuses on real life demons and vices like drugs, addiction, hatred, violence, and other unsavory topics like suicide and abortion.

Termanology (Term) is a product of the â€œ978â€ from Lawrence, MA. and is a mainstay street poet rapper in the Boston hip hop scene. Term took the stage with a smooth old school ebb and flow that seemed to hypnotize the audience like an experienced snake charmer.

Term started off in 2004 attracting attention with his independently released â€œOut The Gateâ€ in 2005. Term followed with â€œPolitics As Usualâ€ featuring the critically acclaimed â€œWatch How It Go Downâ€. Term is a true hustler and a struggle rapper always trying to make things happen. Term puts as much effort into his mix tape series â€œHood Politicsâ€ as he does his studio albums. Term was known to hand out mix tapes while free styling outside record labels in New York. Term is supporting his latest â€œG.O.Y.A. (Guns or Yay Available)â€ released in 2013.

Jaysaun got his start in the 90s underground in â€œThe Kreatorsâ€. Jaysaun continued on with Special Teamz alongside Edo G and Slaine. Jaysaun is supporting his debut â€œGame Of Breathâ€ with DJ Revolution. Jaysaun leaves a little bit of himself in every song he writes giving his lyrics their own style and personality. â€œSimple Mathematicsâ€ was the one song where the crowd became one with everyone swaying and singing the lyrics together, bouncers and doormen included. 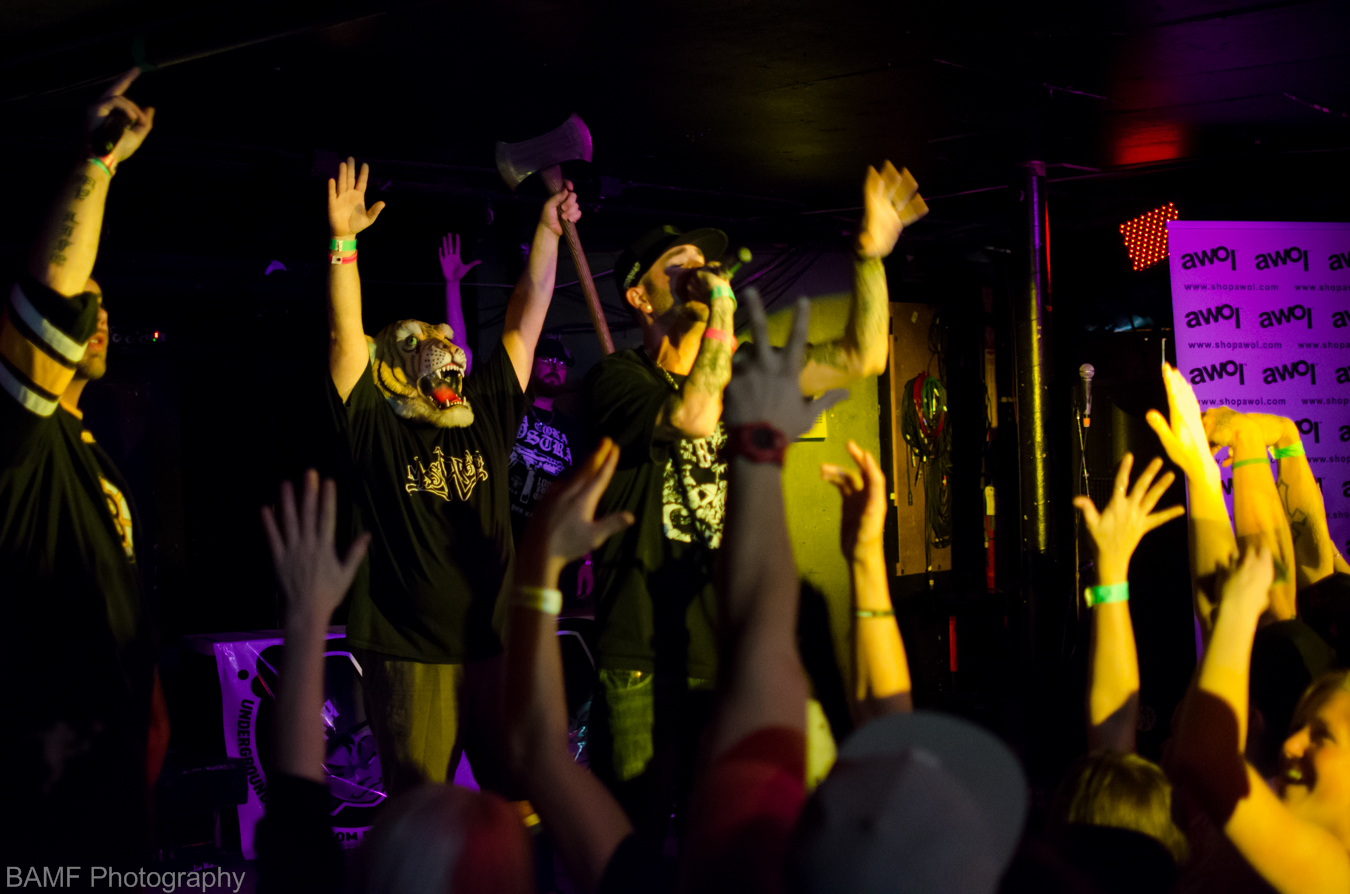 Masstapeace recorded their first track â€œWho Da Fuck Is Thisâ€ in 2007. They released their first full length titled â€œTime 2 Make Movesâ€ in August of 2008 followed by â€œTime 2 Make Mu$icâ€ in 2011 including a track featuring Slaine. A Masstapeace is fronted by Legendary Axe, Tyga Style, and Joey B. They shared the stage with â€œthe man in the maskâ€ who wears a tiger mask and wields a double sided axe on stage stirring the crowd to a circle pit. Masstapeace is working on their much anticipated third installment.

Stiz Grimey, Danny Danja,Â and PauseÂ hit the stage non-stop back to back to back cutting their craft and getting the crowd worked up with instant connections and high energy performances.

Stiz Grimey hails from Chelsea, MA and is supporting his debut project â€œSpare Changeâ€ released February 2014 hosted by DJ Deadeye. Stiz found rap at a young age and his natural flow gives him a lyrical and musical maturity that many have taken years to achieve. Although Stiz lets things come together naturally and organically, he treats the studio as his gym where he hones his skills where he is always pushing himself to the next level.

Danny Danja grew up in Springfield, MA, where he says he was 5 minutes from the hood one way and 5 minutes from farms another way. Danny tries to stay as a true independent creating his own beats or getting beats from personal friends that have the same passion and drive he does. Danny displays introspective messages over trap or experimental beats. Danny says one of the his greatest challenges is is finding a good balance between honoring classic hip hop like Pharcyde and Talkb Kweli while still being new and innovative.

Pause grew up in Northern California and now lives in Venice, CA. Pause is getting international recognition and has had songs featured in on tv and video games with â€œShouts Outâ€ on the Showtime series â€˜Ray Donovanâ€™ and â€œCarolineâ€ on the video game â€˜Saints Row IVâ€™. Pause is supporting his latest “Pacific Rose” released July 2013.