The threat of a blizzard does little to deter the fans filling out Space in Evanston for Rachael Yamagata’s two-night run.

New York native, Matt Sucich, opens on the second of a two-night engagement. Performing a strong set to begin the proceedings, one of the first things you notice is that Sucich’s voice has shades of Paul Simon to it. His songs are full of raw, open and personal lyrics, and it is clear to see that he has the audience’s full attention as they silently take in his performance. Judging by the number of people who flocked to the merch stand after his set to buy his various vinyl offerings, he most certainly picked up a number of new followers from this evening’s show.

Taking to the stage against a backdrop of rapturous applause, Rachael Yamagata makes her way through the crowd to take to the stage. Rachael’s musical journey began when she was part of local band, Bumpus. Tonight, there were members of the band, and also their followers, here to show their support. After spending ten years living in Chicago when she was younger, the city has certainly left its impression on her, and her on it.

Rachael is performing solo on her current tour, and she mentioned how she is enjoying the challenge of doing it “all by herself.” This tour is one of new ventures, one of which is a screen behind Rachael which has various photos or videos projected onto it as she performs. Throughout the night she (mostly) does a great job of keeping her timing on point ensuring that the right images and videos accompany the right songs and the screen does add a little extra depth to the performance.

This is a very stripped back performance, with Rachael’s huge voice front and center, accompanied by either the grand piano or her acoustic guitar.  Whilst you cannot fail to be moved by her very personal and sole-bearing lyrics, this is certainly not a maudlin night, as Rachael injects some humor in between each of the songs as she explains their origins. One of the biggest laughs is reserved for the introduction of “Let Me Be Your Girl” from her most recent album, Tightrope Walker, during which Rachael muses that she wrote the song front the point of view of one of her cats (who is a massive flirt) singing to the other.

To get on a stage and entertain an audience all on your own for a full set takes a lot of guts along with an equal amount of skill but Rachael comfortably pulls off this feat. Throughout the night her raw talent and songwriting craft shines through and makes this a genuine night to remember for the packed venue.

Rachael’s tour continues on through till March, so be sure to catch her should she come to your town as this could be her last set of US dates for 2018. 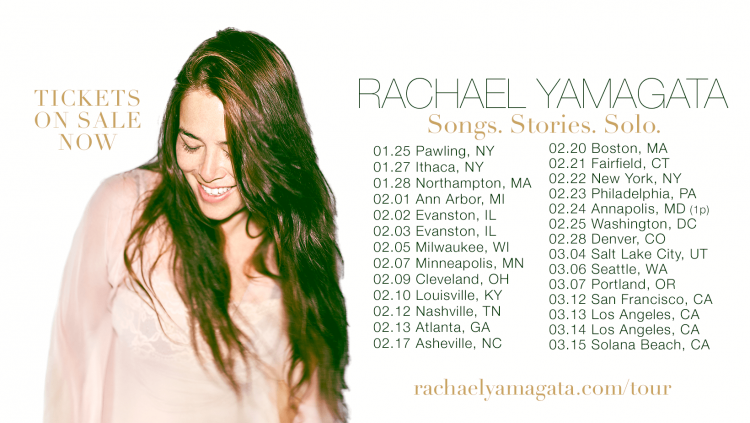