Queen and Adam Lambert make a triumphant return to Tyneside in front of a full house at the Metro Radio Arena.

Tonight’s show in Newcastle marks Queen and Adam Lambert’s first show in the region since 2015. As the anticipation builds inside the room somewhat of a carnival atmosphere prevails with an impressive Mexican wave making its way around the arena.

Queen has had somewhat of a long history with the North East of England. Tonight Brian May fondly reminisces of days gone by performing at Newcastle City Hall. Of course, the band’s last appearance in the region with Freddie Mercury was back in 1986 at St James’ Park, a mere stone’s throw away from tonight’s venue. 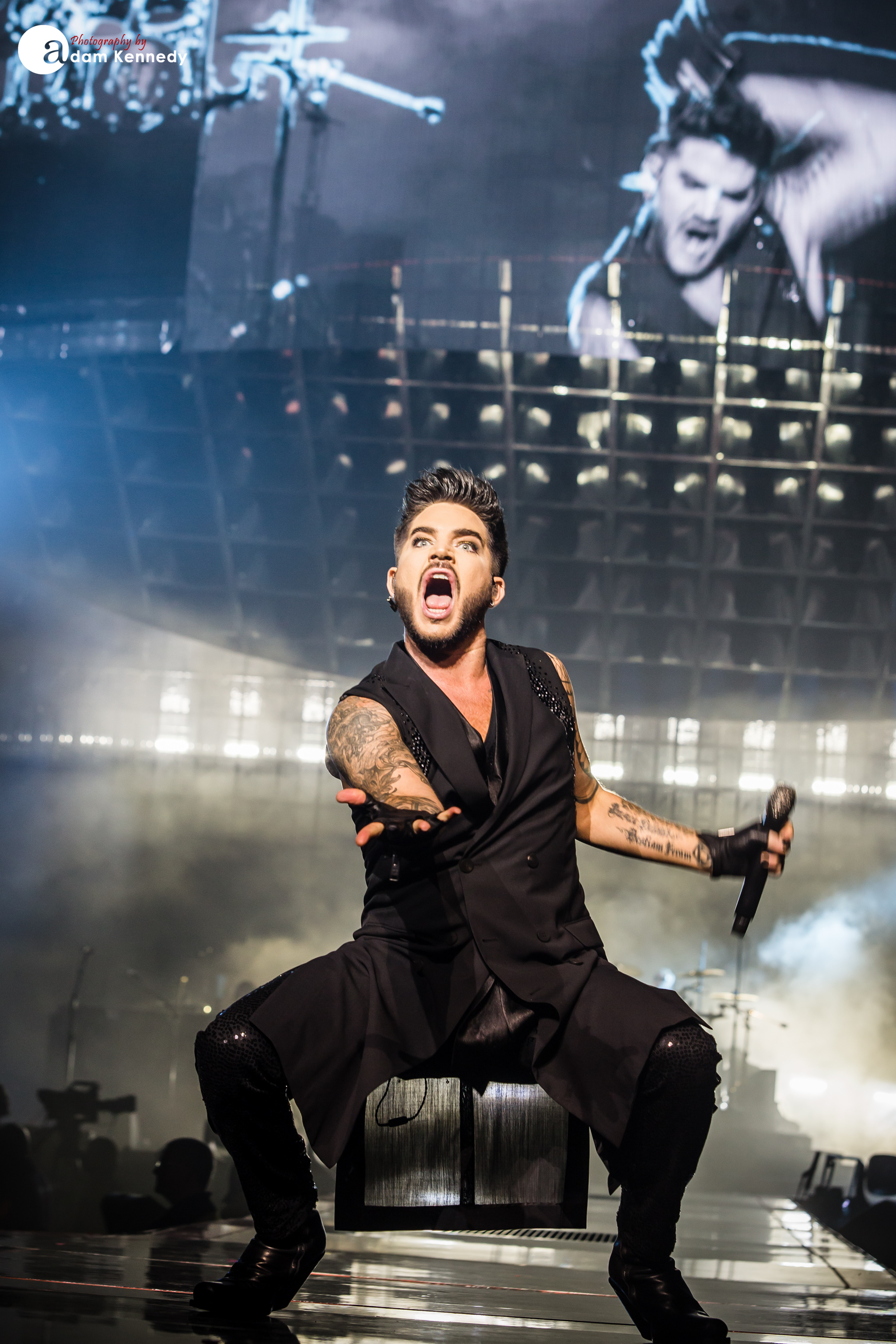 This year marks 26 years since the passing of the band’s iconic and dearly missed frontman. In recent times Paul Rodgers enjoyed a significant tenure with the group before US-based vocalist Adam Lambert took over the reins five years ago.

Despite this, the naysayers will argue you can’t have Queen without Freddie Mercury. However, Lambert himself quashes any fears that he is trying to replace the legendary frontman early in the show by proclaiming ‘there will only be one rock god named Freddie Mercury’. He continues by informing the audience that he is a fan too, despite the fact he is up on stage and wearing a rather expensive suit; much to the crowd’s amusement.

Subsequently, tonight the fans and Adam Lambert unite and make a pact to ‘celebrate Freddie and Queen together’ and this newly struck bond with the band’s North East fanbase results in a rather fitting rendition of “Don’t Stop Me Now”.

Queen’s landmark 1977 record News of the World is currently marking its 40th anniversary. This time around the band’s incredible stage production draws inspiration from the album’s artwork.

Tonight’s two-hour show traverses Queen’s vast body of work. The likes of the frantic strobe fuelled “Stone Cold Crazy”, the hard rocking “Tie Your Mother Down” and the anthemic “Another One Bites The Dust” all feature at the top of the show.

Adam Lambert is a true showman and also injects a degree of raunchy humour. Adam’s theatrical antics include circumnavigating the stage on a pink tricycle during “Bicycle Race” and being elevated on stage atop of Frank (from the painting by Frank Kelly Freas depicted on the News of the World cover) during “Killer Queen”. There is also room for a multitude of costume changes between numbers.

Queen’s expansive stage features a huge catwalk spanning out into the middle of the arena, which also acts as a B-stage mid-set. With the trio of May, Taylor and Lambert all gathered at the edge of the walkway they collectively perform both “Somebody To Love” and “Crazy Little Thing Called Love”. 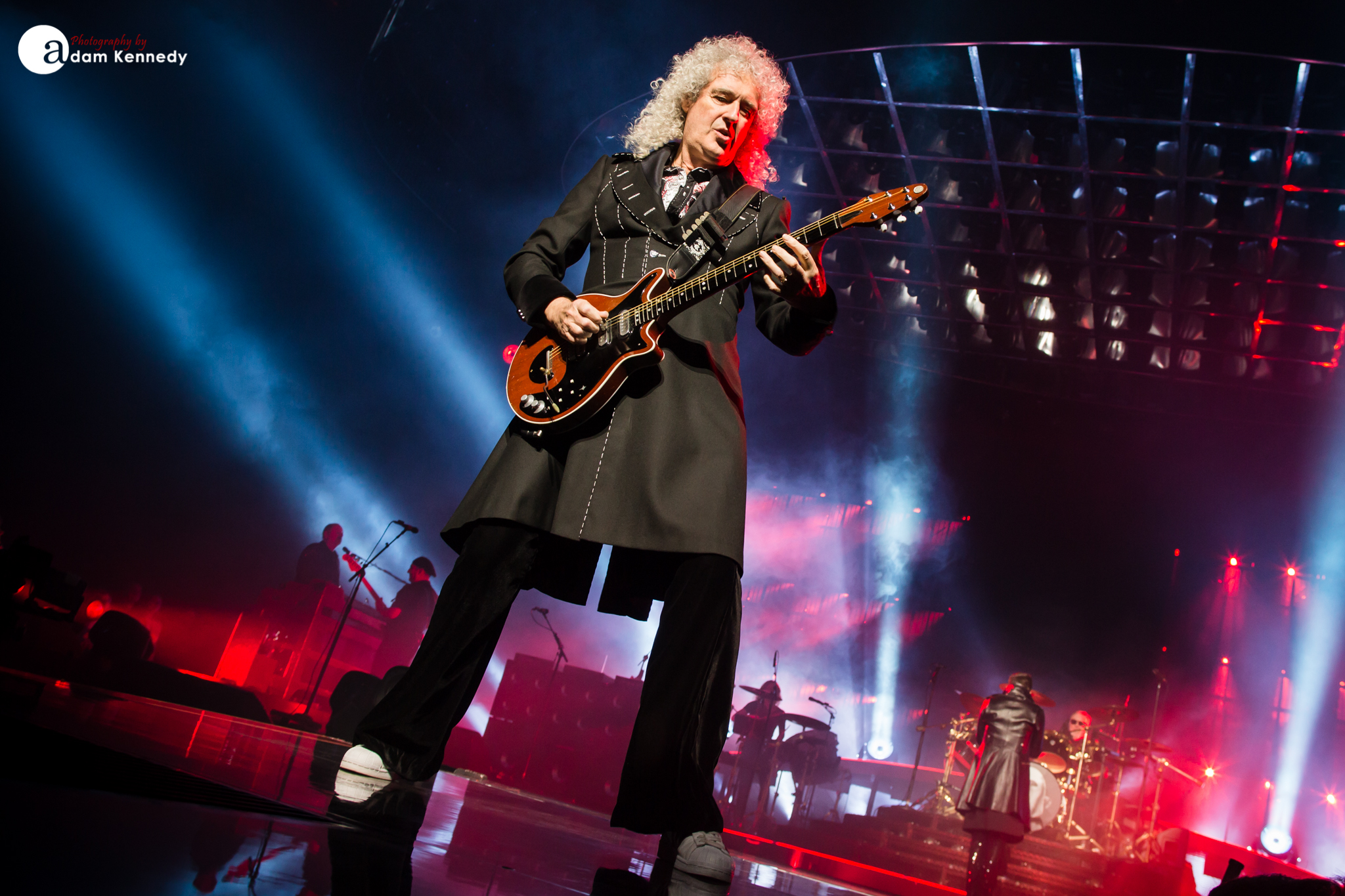 Grasping his twelve-string acoustic guitar Brian May delivers a heartfelt solo rendition of “Love of My Life”. The song is brought to its emotive conclusion with a video of Freddie Mercury singing the final few bars of the number, which is certainly enough to bring a lump to anyone’s throat.

Following an epic rhythmic drum battle between Roger Taylor and US-based percussionist extraordinaire Tyler Warren, the Queen sticks man takes over on lead vocals during the classic “A Kind of Magic”.

Adam Lambert’s simply astonishing performance during “Who Wants To Live Forever” is enough to silence even the die-hard Queen purists. He is truly a vocal powerhouse.

As the band hurtle towards the finish line, they bring the evening to a close with a myriad of crowd-pleasing anthems and fan favourites in the shape of “Radio Gaga”, “Bohemian Rhapsody” and a two-song encore of “We Are The Champions” and the thunderous “We Will Rock You”.

As the band takes their bows and exits the stage, as is customary “God Save The Queen” resonates throughout the Metro Radio Arena. Tonight the verdict is unanimous in the North East, Queen and Adam Lambert were nothing short of majestic.