P!nk soars high at the United Center as she returns to Chicago with the first of her two-night sold-out Beautiful Trauma tour.

After a few teaser shows last year, P!nk is finally back for a US tour in support of her album, Beautiful Trauma. The United Center was packed to capacity as fans flocked to see her first full tour since 2013/14 and, it has to be said, this is a tour that was worth the wait.

Starting as she meant to go on, P!nk burst onto the stage, flying high, swinging from a chandelier. What better way to make an entrance. The excitement and energy didn’t stop there. Throughout the show, she had several stints of flying around the stage and even the arena. At one point, she’s bouncing up to kick an inflatable Eminem in the face during their duet of “Revenge”, the next she is hanging solely by her foot from another aerial acrobat as she sings “Secrets”.

The acrobatic performances are just one of the many parts of P!nk’s live shows that stand her apart from the rest. However, what is even more impressive is the fact that she sings every word and hits every note perfectly while she’s twisting and turning in the air.  Indeed, she is an artist who simply excels in the live environment where, seemingly pumped up by the excitement and emotion of the occasion, she consistently showcases the amazing power of her voice. 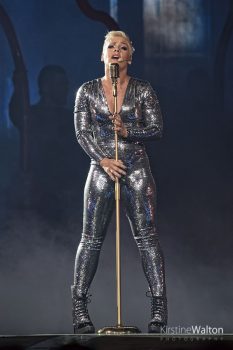 Throughout the show, her music videos are reenacted and brought to life on the ample stage. “Try” sees her performing an emotional fight/dance in an enchanted forest with one of her male dancers,at one point supporting his entire weight while still being pitch perfect. For “Just Give Me A Reason” she levitated above the audience in the pit on a four-poster bed, while Nate Ruess appeared on TV screens for his part of their duet.

Each time you see P!nk you wonder what new elements she can bring to the performance, but each time she raises the bar yet again.  Not only does she make the entire performance appear to be effortless, she truly looks like she is having the time of her life on the stage. The respect and camaraderie for her band and dancers is clearly evident throughout, taking the time to name everyone individually, providing each of them their moment in the spotlight in turn.

In between some of the songs, to distract away from the set changes, the screen that spans the back of the stage comes to life, projecting past clips of interviews and speeches from across the years. A particularly notable one was her speech from when she collected the VMA’s Video Vanguard Award, which was met with cheers from around the entire arena.

If you’ve seen one of her live shows before, you’ll know that she likes to throw in a cover midway through the set. For this tour, she invites you to “lose your mind for four minutes” as the band rock out to Nirvana’s “Smells Like Teen Spirit”. And lose their minds they did, as the whole of the United Center sang and bounced along to the classic.

Throughout the show, the United Center was filled with the audience’s voices as they sang and danced along. Many women were there with their young daughters, which can only be a good thing given the positive and inclusive message that P!nk projects. At one point, a clip from a previous interview is broadcast on the large screen, during which P!nk states that feminism is not something to be afraid of, to which the cheers could be heard all around.

With the Beautiful Trauma tour P!nk proves again that she is not one to be pigeon-holed. Blending the lines between pop and rock, she dips in and out of energetic songs like “Funhouse” mashed up with No Doubt’s “I’m Just A Girl” and includes a stripped back gospel-infused “I Am Here”. The night is rounded out with her flying around the entire arena, giving everyone a chance to be up close to the singer, as she belts out “So What” before returning to the stage for a simple rendition of “Glitter In The Air” which puts the focus firmly on that amazing voice.

It might have been a bit of a wait to see P!nk back on our stages, but this tour shows she still more than has it, and her draw is as strong as ever with dates selling out quickly. This isn’t a concert, but a full-stage production extravaganza which ensures you more than get your money’s worth. The tour has just started so you still have a chance to get yourself along to this one. You will not regret it.