The ‘hottest band in the land’ open the UK leg of their Kissworld tour in Glasgow, Scotland.

Tonight marks the start of the first full KISS headline UK run since 2010’s Sonic Boom Over Europe tour. Subsequently, the Scottish branch of the KISS Army is out in force this evening with a 13,000 strong crowd at the SSE Hydro. Countless fans arrive at the venue in full KISS regalia including face paint and all, whilst others proudly wear tour shirts from days gone by.

The UK has been witnessing somewhat of a heatwave over this late May bank holiday weekend, to coin a phrase from the KISS songbook, it’s felt almost ‘Hotter than Hell’ in the city today.

It’s been five years since the band’s last full studio album, but at the start of June, the Rock N Roll Hall of Famers will be releasing Kissworld – The Best of KISS; which is a record that brings together twenty of their beloved tracks from the group’s extensive back catalogue spanning 44 albums. 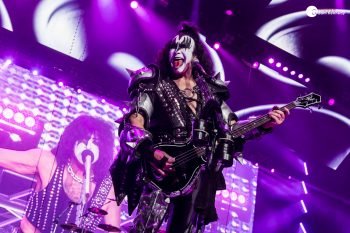 As the curtain falls, KISS descends to the stage on high risers whilst shrouded in plumes of smoke. From the opening notes of their classic “Deuce”, the band do not take their foot off the gas for one second.

To tie in with their forthcoming release this evening the quartet delivers arguably one of their strongest greatest hits set possible. The show is packed full of KISS classics such as “I Love It Loud”, “War Machine” and “Firehouse” sitting side by side with a rare performance of “Flaming Youth” from Destroyer and the band’s more recent material like “Say Yeah” from the Sonic Boom record. Song after song is greeted with feverish cheers and adulation from the Scottish faithful.

Paul Stanley addresses the audience indicating that the band has been coming to Scotland since 1976. Of course, there are many in attendance tonight that wasn’t even born at that point.

As you look around the room you can see the many generations of KISS fans, from the die-hards who have been following the group all of their lives through to children and teenagers who have been brought along by their parents to their first KISS concert. As such one lucky young fan gets the chance of a lifetime to accompany Paul on stage during the anthemic “I Love It Loud”. 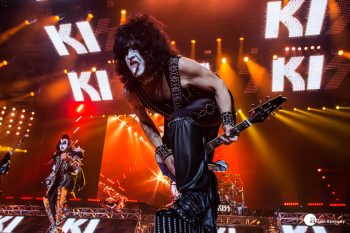 Following the tragic events in Manchester this week, early in the show the band pay their respects by leading the audience into a minutes silence, which is respectfully observed by the sold out crowd in attendance tonight.

A KISS show is not like any other concert you’ve seen before. In terms of production, the group raises the bar higher than any other rock band on the international touring circuit. A KISS concert comes complete with impressive visuals, a myriad of pyrotechnics and fireworks that would rival any 4th July display, projectile confetti and ticker tape, fire breathing and blood spitting from Gene Simmons, as well as aerial antics from the four band members which bring the fans closer to the heart of the action. It truly is a spectacle to behold.

As the band enter into the final third of the show, Paul Stanley ventures out onto a zip wire, hurtling across the top of the audience to a second stage at the rear of the room. From here he leads the crowd into “Psycho Circus” before returning to the stage for old favourite “Black Diamond”.

The main set is brought to a close with the anthemic “Rock and Roll All Nite”, and judging by the mood in the room tonight the Glaswegian fans are going to do exactly that. KISS later returns to the stage for a duly deserved encore comprising of the band’s disco rock hit “I Was Made For Loving You” and “Detroit Rock City”; a mass singalong ensues.

Glasgow, you wanted the best and you got it.