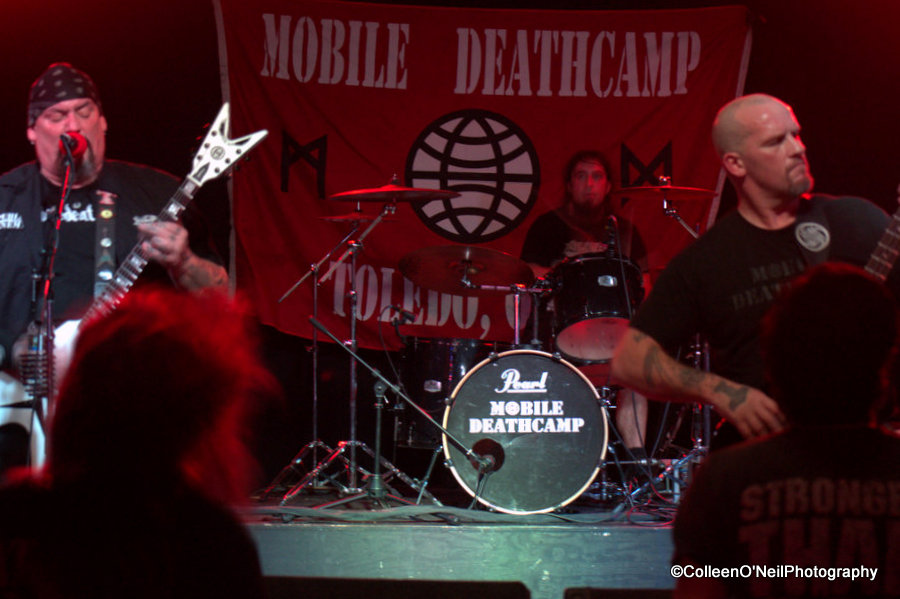 Mobile DeathcampÂ claimed a beach-head on stage with a mighty assault of packed-in, super-freight-train, screaming metal. They planted their flag and raised the banner with powering guitar tone, thumping bass, and drums sticks flying at break-neck speed. The band played at Fubar in St. Louis, Missouri on January 10th, 2014.

Mobile Deathcamp consists of Todd Evans on guitars/vocals, BoeÂ Skadeland on bass, and Chad Smith on drums. They hail from Toledo, Ohio.

I spoke with Todd Evans before the show knowing this wasÂ a genre stretch for me personally. I expressed to him I do not like thrash metal, to which he replied, â€œI donâ€™t either.â€ This was a refreshing discussion as it showed Evans didnâ€™t take himself too seriously or have a certain haughtinessÂ about the music he played.

The members of the band all had a humble, approachable attitude, which prepared the crowd for the hardcore ear-piercing metal they were about to hear. The band specializes in blazing three-minute songs that smash through most regular musical conventions.

There was a long wait before Mobile DeathcampÂ came on stage, due to four different bands opening for them. It is becoming clearÂ St. Louis is a hotbed for many different types of bands. Those that played did not seem to sync well with MDCâ€™s style of music. It would have been better if there had been coordinationÂ with the local band management and MDC to come up with bands compliment MDC.

There was a good crowd represented, but as I found out three hours later, it mostly consisted of the earlier band members. It would have been better had this gig were properly promoted.

As the MDC assaulted began, all theÂ gaffes by the previous bands were completely eradicated by the gut-smashing chords emanating from the stage. You could tell the professional metal soldiers had arrived. MDC generated an otherworldly ‘Phil Spector-esqe’ wall of sound which filled the venue. They achievedÂ this fortress of sonics with minimal equipment on stage. It would be interesting to examine their audio system blueprint to see how they achieve such an incredible sound, but I am sure they would have to kill me after they told me.

The musical battle continued with Todd Evans in command on his white Dean guitar. This battle-axe was fittedÂ with only one Seymour Duncan pickup and provided a key ingredient to the wall of sound being constructed. Evans assaulted the thin neck of the Dean at such a speed, it seemed as if the neck would snap off in pieces flying into anyone standing within the blast radius. Evans previously played bass with shock rockers GWARÂ as Beefcake the Mighty for almost six years.

At bass was assistant assassin of sound, BoeÂ Skadeland. SkadelandÂ usedÂ every action he could on the bass without a pick. He appeared spider-like as he dominated the bass as he squeezed every note out of his instrument. With him on stage is his Traveler bass amp, which is a great sonic choice.

Drummer Chad Smith ruled the drums as a ninja assassin closing the circle; he was the third and last ingredient in the wall of sound.

The night ended well and Mobile DeathcampÂ fulfilled their promise of quick attack metal. MDC are definitely road warriors and will be coming to your town for another gig of eardrum assaulting licks. Their tour ends April 1st 2014. Make sure you see them; you will be a fool if you miss it.