Combichrist brought their aggrotech sounds to an eager crowd in Pontiac, Michigan with Darksiderz, William Control, and Davey Suicide

This is a package tour put together the way package tours should be. Here were four bands each playing a completely different genre of music but having one thing in common; electronic music. While each band had electronics in their music, Combichrist played their hard-edged aggrotech, Darksiderz played their hard dance EDM, William Control played his Goth-influenced darkwave, and Davey Suicide played his industrialized rock nâ€™ roll. 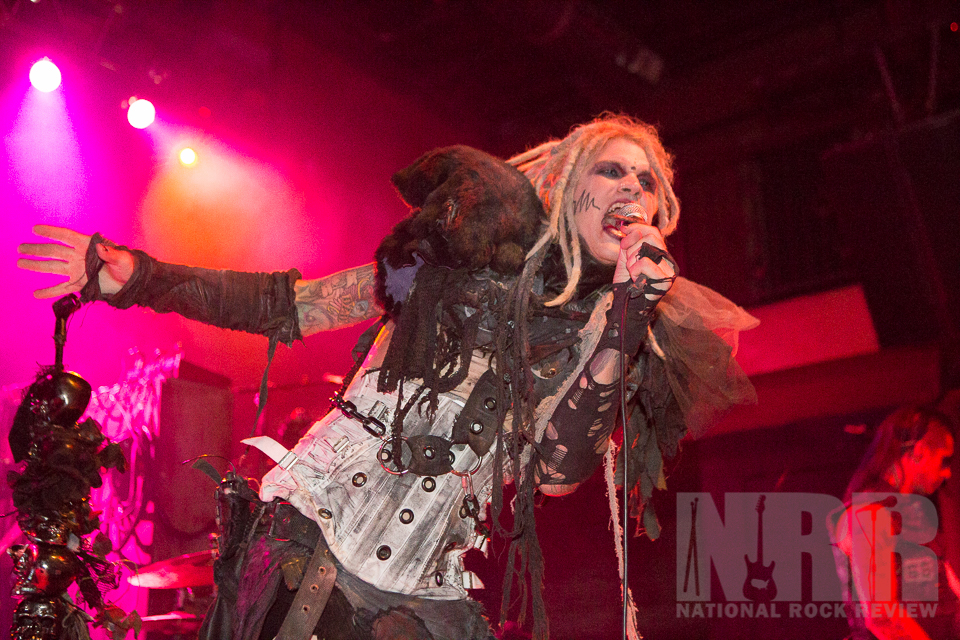 Davey Suicide took the stage first. The band comes to us from the dirty, gritty, seedy rock underworld of Los Angeles (UnHolywood, Killafornia, as Suicide likes to tell his fans). Suicideâ€™s music is a mix of Goth punk industrialized heavy metal while the band thrashes around with an energetic theatrical live show. He has built a loyal following due to a constant touring schedule and remains one of the most recognizable figures within his genre.

Suicide opened his set with â€œWorld Wide Suicide.â€ The pit was in full-force from the first note. At one point, Suicide had the crowd pumping their fists in the air and chanting along to â€œGod Head Killers,â€ “”Kids of America,” “Until We’re Dead,” and “The Devil Inside” then had the crowd swaying back â€˜n forth, mesmerized to the mellow groove of â€œOne More Night.â€ The highlight of his set was the set closer, â€œGeneration Fuck Star,â€ an anthemic call-to-arms for the 21st century disillusioned & disenfranchised youth. The song is heavy, powerful, and pissed off. Suicide also told some personal stories throughout his set that his audience seemed to relate to. He is very personable with his audience and seems to be in music for the long haul. He is the perfect mix of Rob Zombie and Marilyn Manson with an Axl Rose sneer. 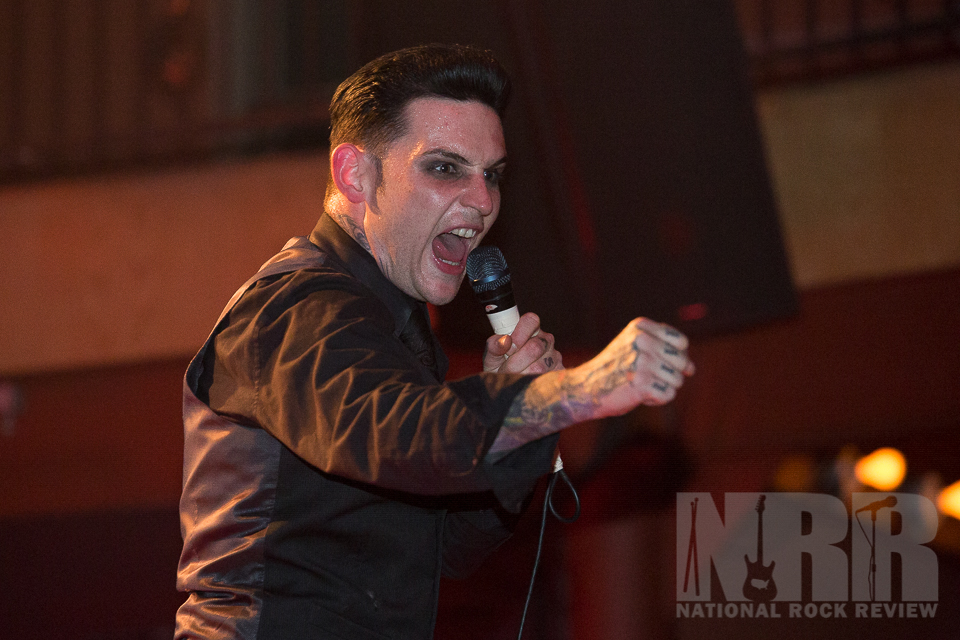 Next up was William Control. Originally the front man for the rock band Aiden, mastermind William Francis created William Control to create music that did not match the style of Aiden. It is an outlet for Francis to experiment with musically. This was a great move for him as he has built a large fanatic following with his gothic sounding darkwave music.

William Control is the perfect front man for the darkwave generation. He oozes charm and knows how to get the crowd in the palm of his hand. It was as if Francis had the audience in some type of hypnotic trance. He had them bouncing, waving their hands in the air, swaying and dancing to the music for hisÂ entire set. The crowd did not take a break. They danced along to such great tracks as “The Velvet Warms And Binds,” “New World Order,” and “Kiss Me Judas.”

Francis mixes the charisma of Andrew Eldridtch and Ville Vallo with the swagger of Frank Sinatra. He has the look, he has the voice, and he knows how to entertain the crowd. Even if you donâ€™t like the music, William Control is worth seeing just for the tricks Francis can pull off with his microphone. Whether swinging it above his head or launching it into the air and catching it just in time to sing the chorus, he pulls it off flawlessly. 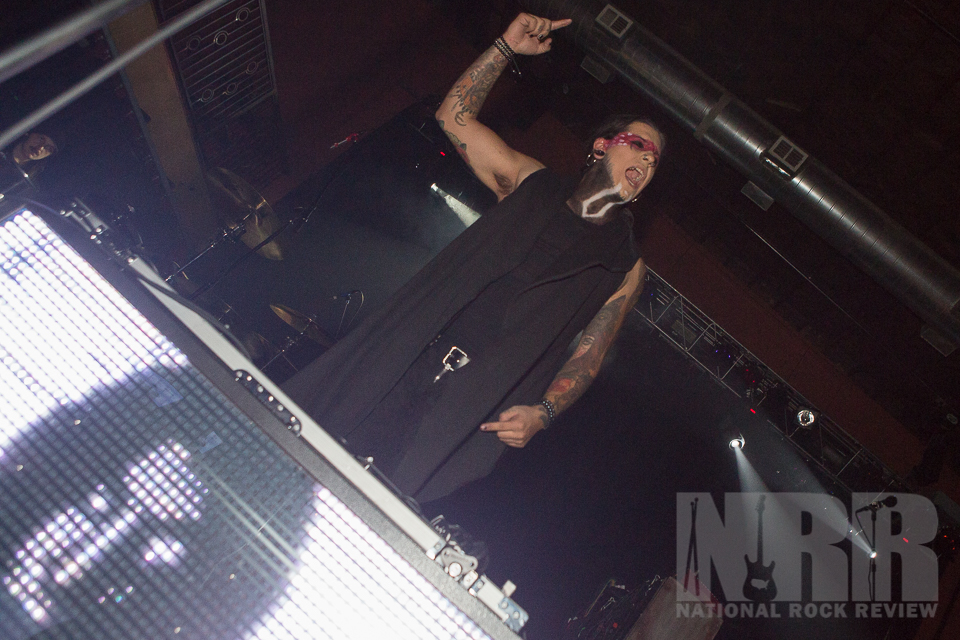 Next up was Darksiderz, a one-man hard-dance musician by the name of Aaron “Necroflesh” Wallace. Wallace is a powerhouse behind the decks and had the crowd pogoing to his industrialized hardstyle beats.

Wallace brought some original hard beats to the dance floor interspersed with some remixes he did, one of which was a William Control track. Wallace had an exciting light show and seemed to hypnotize the crowd with his music. 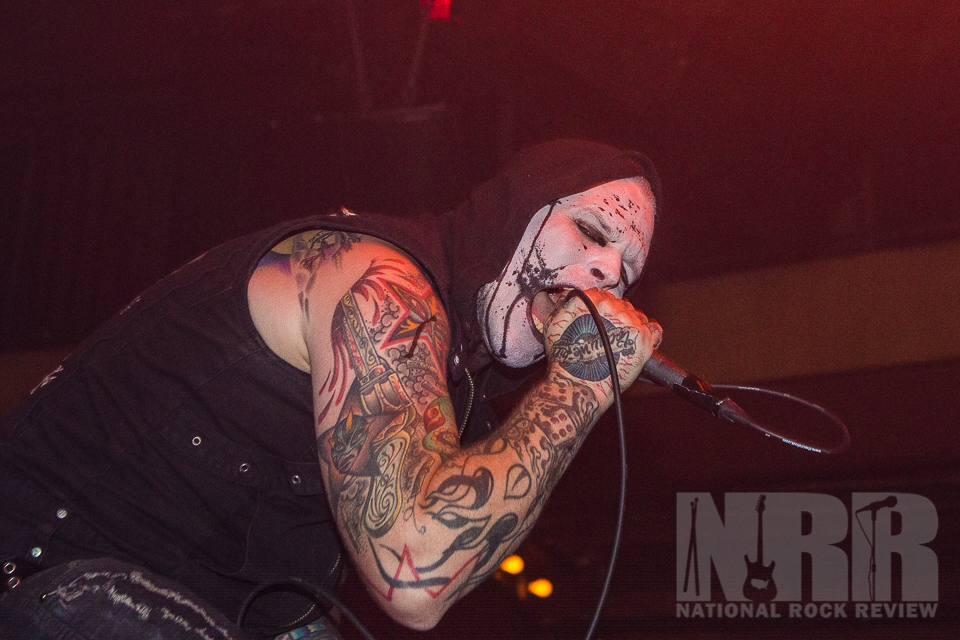 Combichrist took control of the stage almost immediately after Darksiderz set, opening up with â€œWe Were Made To Love You.â€ Singer Andy LaPlegua had the crowd wrapped up in his fist upon the hit of the first note. LaPlegua moshed around the stage with such energy that at times I felt like I was at a hardcore punk rock show.

The band cut right into â€œToday I Woke Up To The Rain of Bloodâ€ and the dance floor was in full-effect. The crowd danced and moshed the night away to such classics as â€œThis Is My Rifle,â€ â€œThroat Full Of Glass,â€ â€œNever Surrender,â€ â€œThe Evil In Me,â€ and â€œFuck That Shit.”

I especially enjoyed â€œThe Evil In Meâ€ as the band played it acoustic while the drummer fixed his drum set. His drums kept breaking so he spent some extra time fixing them during this song. As soon as they were fixed, the band kicked the song into full gear only to have the drums break down again. At this point, the band stopped and LaPlegua stated â€œEverybody say fuck you Joeyâ€ referring to the drummer, Joe Letz.

For the encore, LaPlegua stated, â€œLetâ€™s do one more song then start the drinking. Itâ€™s Friday night. Just sayinâ€™, letâ€™s start the party.â€ Letz brought a piece of his broken drum set to the front of the stage where he handed it out to the crowd to hold up for him. As the people in the front held up his drum, he started banging away to â€œWhat The Fuck Is Wrong With You?â€ Wallace from Darksiderz came out to sing along with LaPlegua on this one. As the song ended, Letz walked over to his drum set and kicked the rest of it apart then the band walked off stage to the continuous hum of the keyboard. Mission complete.

Our photographer, Joe Orlando, was on-hand to capture all the bands in action. Here are his images from that night.