With less than two months until the second Chicago Open Air, additional onsite attractions have been announced.

The Chicago Open Air is taking place on July 14-16 at Toyota Park in Bridgeview. This year’s headliners are Kiss, Ozzy Osbourne and Korn, and will be joined by the likes of Rob Zombie, Slayer and Godsmack. Festival goers will get to witness not only one of Ozzy Osbourne’s first solo performances since the final Black Sabbath tour, but will also get to see him reunited with guitarist Zakk Wylde for the first time in a decade.

The three-day music, craft beer and Gourmet Man Food Festival will feature more than 40 music performances. SiriusXM’s Jose Mangin will be returning to the host the weekend and introduce the numerous acts.

In addition to the masters of rock line-up, Chicago Open Air have also announced additional onsite experiences, as well as an official kickoff dinner.

The Chicago Open Air Kickoff Dinner will be held at Kuma’s Corner (2900 W. Belmont) on Thursday, July 13 at 7pm. The dinner will cost $50 and will include burgers, appetizers and beer as well as getting to hang out with Jose Mangin. There will only be 100 tickets available, so be sure to get yours now at www.ChicagoOpenAir.com.

Monster Energy: Stop by the Monster viewing deck to refuel and meet some of your favorite Chicago Open Air artists! Fans can keep fueled up and ready to rock by enjoying free samples on the Monster Energy viewing deck, some of the best seats in the house. Make sure to check back throughout the festival for a schedule of Monster Energyâ€™s interactive artist experiences.

Jack Danielâ€™s: â€œTaste of Tennesseeâ€ invites visitors to come out and tour the nationâ€™s oldest registered distillery from outside the Jack Danielâ€™s Hollow. Visitors get to see (and smell) whiskey dripping slowly through charcoal and the new oak barrels used in maturing Tennesseeâ€™s finest whiskey. The Experience is open to all fans, 21 years old and up, for tours free of charge. Stop by the Jack Danielâ€™s Experience for interactive engagements throughout the weekend.

Revolution Brewing: Illinois’ largest craft brewery is brewed right in the heart of Chicago. Started as a brewpub in Logan Square in 2010, Revolution added to its growth with the 2012 opening of its production facility in the Avondale neighborhood, just a short distance from the brewpub.  Revolution offers dozens of different beer styles to craft beer fans through stores, its brewpub, and its taproom located at the brewery. Revolution focuses on brewing the highest quality beer as displayed in its popular brews such as Anti-Hero IPA and Fist City, a Chicago pale ale.

The Music Experience: The Music Experience is an interactive exhibit which features your chance to test out your inner Rock Star with guitars, basses, amps, drums, keyboards and electronic gear that are used by todayâ€™s most popular bands. After laying your hands on the hottest equipment available, you will walk away feeling like a rock star! Find a full list of exhibitors coming soon.

Ellefson Coffee House: The premier roasts from Megadethâ€™s David Ellefson will be available onsite at Chicago Open Air exclusively at this special fan meetup spot. Ellefson opened his first coffeeshop in his hometown of Jackson, Minnesota in February 2017 and offers various blends including Roast in Peace, Kenya Thrash, She Wolf and Urban Legend. You might even see the bassist-turned-barista serving coffee!

Heavy Tiki: The dark side of Tiki is through the totems where savages and beasts enjoy Scorpion Bowls and Zombie cocktailsâ€”all in the name of tropical leisure. Come to the Heavy Tiki Bar, where fans can find an oasis filled with killer cocktails, shade, and a live broadcast from the one and only Mancow, the legendary radio personality from Chicagoâ€™s WLUP.

The BlackCraft Stage: the second stage at Chicago Open Air. Beez from â€œThat’s Not Metalâ€ will also be interviewing artists backstage for BlackCraft all weekend. Set times and performing artists will be announced at the end of June. Be sure to visit the BlackCraft apparel shop next to the stage. Itâ€™s the only place to purchase BlackCraft merchandise over the weekend.

FYE: FYE is the ONLY place to buy  your favorite Chicago Open Air artistsâ€™ latest CDs and Vinyl at the festival and even get a chance to get them signed! They will be hosting artist signings all weekend long.

Fxck Cancer: The Dyin 2 Live DREAMS Program is a wish-granting organization whose purpose is to try and enrich the lives of those fighting cancer by offering them an experience that will bring hope and inspiration to their lives. In doing this, we hope it can help give them a chance to forget, even if it’s only for a day, what they are battling. Dyin 2 Live Dream can offer a source of inspiration for those undergoing difficult medical treatments and be a positive force that offers a life-changing impact not only on them, but also the family to overcome their obstacles. If you are currently fighting cancer or know of someone in the fight who could benefit from a Dyin 2 Live Dream, please submit your story and tell them why and how a Dyin 2 Live day would help. Also, anyone interested in being a supporter, volunteer, or donor, please contact us at mywish@dyin2live.org.

Take Me Home: Take Me Home (TMH) has been saving the lives of homeless animals since 2001. TMH was founded as an animal rights advocacy foundation saving orphaned animals and striving to end animal overpopulation. TMH works in conjunction with shelters and rescues throughout California and beyond to help save animals on death row, on the streets, or in unsafe living conditions. Stop by their booth for custom gear and to contribute to a great cause. 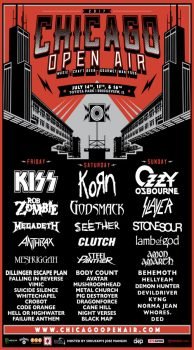 General Admission and VIP tickets are on sale now at www.ChicagoOpenAir.com and at all Chicago-area Kumaâ€™s Corner locations.