Three things from Canada that make our lives better: hockey, the movie Strange Brew, and now the band Kolony with a nice, new album.

Sledge will be the new self-released album by Kolony that drops on the US market Nov 14, 2014. Writing this album since 2013, the Montreal outfit consists of Reno (Vocals, Rythm Guitar), Maxxx (Lead Guitar), Antony (Drums), and Myk (Bass). Some very strong influences can be hard within their debut release. While not being limited to just these two, their sound can be said to have a very similar feel to Megadeth and Avenged Sevenfold. They are also polished enough with their song writing to have a definite unique spin on this to give them a Kolony style, which some may say is a melodic, rock, metal genre.

The LP runs at about 45-minutes long and has eleven pretty solid tracks. To give a good sense of the album’s direction the list of songs is:

After being asked if there was a message from the album, â€œThe message of the album is one of building a new society,â€ explains (vocalist/guitarist) Reno Benoit. â€œItâ€™s a call to destroy our current pyramidal system and to rebuild another world. Itâ€™s a call to go back to more human values. We want to feel that we live in a world in harmony with the earth; we donâ€™t want to be the slaves of modernity as we feel we are right now.â€ 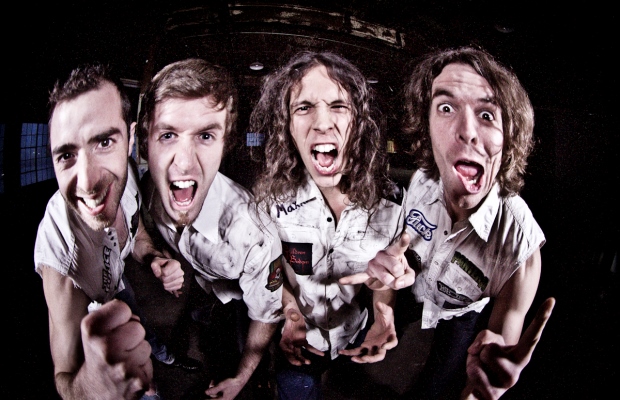 Staying with the new digital age, if you’d like to get a free song of theirs to get a better taste, give “Sledge that Sh%t” a try. If you like what you hear, you can pre-order the new CD Sledge, here.