Hockey, R.C.M.P., and Tim Horton’s all come to mind when you think about Canada. Rednecks, maybe not so much. Them County Bastardz think you should.

This Canadian invasion is a five piece of country renegades. In this Great White North posse, Them County Bastardz, is Andrew Watson (Vocals), Mike Rennie (Rhythm), Jim Kay (Drums), Tyler Wickham (Bass), and Brien Alexander (Lead). The band started their musical rebel crime spree in 2013 and is based in Leamington, ON next to a still and the next batch of sour mash. Their first album release on Feb 24, 2015 is sure to cause a few call offs on Feb 25 for Sick Daze reasons. 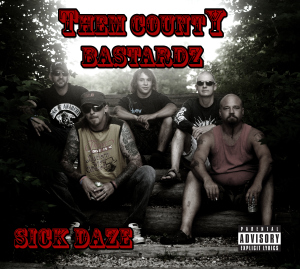 In the current environment of needing the newest gadget, foot peddle, or mixing software for a band to have “their” sound, the guys are not really concerned with any of that. “Does it rock?” “Where’s the beer?” and “You’re not a cop, right?” are more likely to be said by any of the ambassadors from north of the border then worrying about their stand alone processor unit on stage feeding directly into the sound board of the club. They stay predominantly within the metal, almost southern metal genre. “Rise Up,” is a perfect warm up for wondering what the show would be like live. Along with Tyler laying down one hell of a bass solo, it’s a great song that will stick in your head for days.

“It’s Not Metal,” shows a bit of the guys having a sense of humor. Andrew’s vocals are gritty, low, and one Camel unfiltered away from being a total growl on the microphone for the whole album. While the release is in the grey area of being in the middle of a EP and LP in length, there is more then enough tracks to sample the taste and the vibe of the band. In the song, “In The County,” besides a nice unit number, the guys show a penchant for self advertising and cowbells. The track also shows that Jim is a fan of Christopher Walken.

With the new NASCAR season just around the corner, this album would go well with it and the game of cornhole that’s sure to break out. Crack open a sixer and enjoy the sounds from our neighbors. You’ll be glad to check this one out if you’re a fan of Hell Yeah, Black Label Society, or Pantera. Let us know what you think, eh?