Not too hard, and not too soft, Goldilocks would be a fan of new super group, Revolution Saints, with an album coming in February 2015.

The latest trend in rock and metal music is that of all star groups being formed for what is initially a single album release. Some of those experiments meet the test of time and go on to be the main group for some of those in the bands put together this way. Revolution Saints may be one of the bands that beat the odds of one and done.

Frontiers Music srl’s president, Serafino Perugino, has been on a roll with making some of these projects go. With the early success of Michael Sweet and George Lynch in Sweet & Lynch, he may have another hit brewing with Revolution Saints as well. The band consists of Deen Castronovo (lead vocals, drums) of Journey and Bad English fame, Jack Blades (bass, vocals) of Night Ranger, as well as with the Damn Yankees, and Doug Aldrich (guitars) from Whitesnake and Dio. This LP was recorded in Portland, OR during the summer of 2014 and was produced by Alessandro Del Vecchio, who also helped in writing the self titled album and playing keyboards for it. 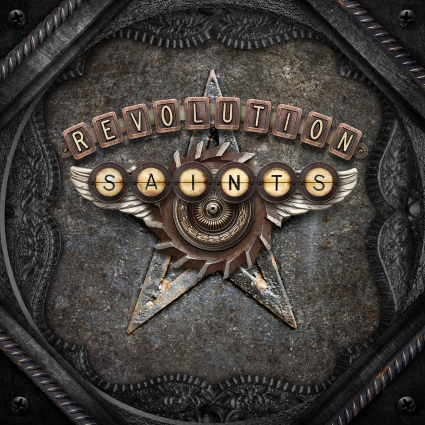 Check out the interview Jack Blades did with National Rock Review’s own Adam Kennedy, here.

The whole package of this album from the production and mixing, to the song writing, and to the vocals and instrumentals are very smooth and polished. While self-described as hard rock or melodic rock, their sound is simply fantastic and reminiscent of what made their former music so memorable. It has just enough attitude to engage a listener without needing the screaming or attitude of harder genres. While it has some softer sounds of a Journey or Night Ranger, it has more then enough energy that it should be too extreme for elevators or your dentist office.

“Don’t Walk Away,” is enchanting in the beginning, with it’s piano opening and is worthy of any 80s power ballad. “Back On My Trail,” is a high energy track perfect to start off the album. Big drums, bigger vocals, and guitar solos that leave nothing to desire give the song its traction and sets a high standard for the rest of the record. “Locked Out Of Paradise,” is another offering that should be heard quite a bit on your local hard rock station. For anyone that used Poison’s “Every Rose has Its Thorn” as a way to deal with a break up, “How To Mend A Broken Heart” is a modern day replacement for the grown ups that remember those days.

This album is a great listen and should be on your to do list on Feb 24, 2015. If you are a fan of any of the bands listed in this article. Let us know what you think of it after you pick up your own copy.