Dan Patlansky recorded and self-produced Perfection Kills in his hometown of Pretoria, South Africa. The album title itself is one that Dan wholeheartedly believes in. Patlansky states that “In any art form perfection doesn’t exist because there is no yard stick to measure it by. The pursuit of perfection ends up doing far more harm to the art than good. This was the mind set we adhered to when we went into the recording studio, “Why try to be perfect?” 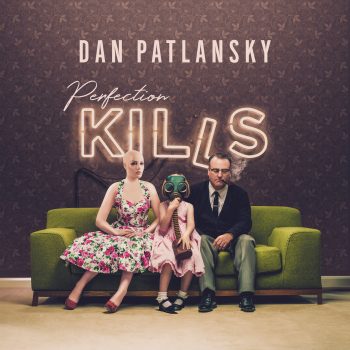 For this record Dan’s intention was to capture his raw, live sound and that’s something that definitely comes across from the opening track “Johnny”. This incredibly funky number really sets the tone for the rest of the album. In places, it is comparable to one of Dan’s biggest hits “Backbite” from the Dear Silence Thieves record. The track features Patlansky’s distinctive heavy, Fender Strat sound, his unmistakable vocals and similarly to “Backbite” it’s packed full of catchy hooks. Much like many of the tracks on the album, the song is accentuated perfectly by the keyboard work of Dean Barret.

Again, Patlansky carries down the same path with blues-rock numbers like “Dog Days”, which was the first single to be taken from the album and also “Junket Man”.

Perfection Kills traverses the whole spectrum of blues. Dan picks up the pace with the frantic rocking number “Too Far Gone”. One of the more prominent guitar riffs in the song is reminiscent in places of “Voodoo Chile” by Jimi Hendrix. On the other hand, one of the slower blues numbers on the album “Judge A Man”, has undertones of classic B.B. King. Perfection Kills portrays the many different facets of what Dan Patlansky is all about.

Of course, Patlansky is a phenomenal guitar player and there are blistering fretwork and solos aplenty throughout the record. However, with heartfelt, soulful blues numbers like “Never Long Enough” and “My Dear Boy” Dan really showcases his songwriting chops.

With each record that follows Dan Patlansky continues to go from strength to strength. Much like with Dan’s previous releases the songs featured on Perfection Kills will inevitably develop, evolve and take on a new life as they are performed live and that will truly be a spectacle to behold.

To dovetail the release of Patlansky’s latest offering he will embark on a UK tour in March 2018 alongside special guest Mollie Marriott. The tour will start at the Manchester Ruby Lounge on Thursday 15th March and include dates in Newcastle (Mar 16), Leek (Mar 17), Bristol (Mar 18), Sheffield (Mar 20) and London (Mar 21).

Perfection Kills will be released on Friday 2nd February 2018.