Livinâ€™ In The Past, the first full length album from Scream Maker, will take you back to the 70’s and 80’s with the high-pitched vocals and metal riffs that made metal heavy. After all, listing influences like Judas Priest, Dio, and Iron Maiden, one would expect nothing less and Scream Maker delivers.

â€In The Nest Of Serpentsâ€ is a melodic song where lead singer, Sebastian Stodolak channels Ronnie James Dio. The vibrato in Sebastianâ€™s voice on this track is RJD. Period. If youâ€™re looking for fast paced guitar riffs in an overall heavy arrangement, â€œGlory for the Foolsâ€ is your song. Again, while the song is all metal, the vocals bring it back down to earth in an incredibly unique way.

The title track, â€œLivinâ€™ In The Past,â€ is gushing with emotion from Sebastian Stodolak where he demonstrates his incredible range. Itâ€™s a song that doesnâ€™t have the fast tempo you might expect, but itâ€™s certainly not a ballad either. If thereâ€™s a song on the album that showcases Sebastianâ€™s power, this is it. If youâ€™re looking for another surprise on the album, â€œFeverâ€ will catch you off guard. Starting off like a ballad, the chorus will punch you in the teeth when you are not looking.

â€œAll My Life,â€ is a song that will make you want to roll the windows down and put the petal to the floor. Itâ€™s a Scorpions-esque type of song with a 1980s, maybe 90s, vibe. Donâ€™t be surprised if this becomes one of your favorite songs on the album. It has great rhythm with a catchy chorus that will stick in your head the rest of the day.

Lead guitarist, Michal Wrona, strums a familiar sounding intro of the song, while Klaus Meine, a member of the band, Scorpions, makes a guest appearance at the beginning of â€œAngel.â€ Obviously Klaus is not on this album, but again, an incredible display of vocal range on this mid-tempo track. Itâ€™s probably a lighter track than you would expect from a metal band. However, just after two minutes into the song, Wrona reminds us they are in fact metal.

â€œSpacestoneâ€ is different. Compared to the rest of the songs on the album, this one does not flow as well as the others. Perhaps it is because it is, in fact, different from the others intentionally. At about the three-minute mark of the song, things start to flow and the guitar riffs save it. It doesnâ€™t, however, seem to fit with the rest of the album.

The guitar intro of â€œStand Togetherâ€ is stellar. This song is one of the true gems of Livinâ€™ in the Past. It starts off slower than most and doesnâ€™t pick up a lot of speed; itâ€™s steady and heavy. At precisely 3:33 into the nearly seven minute song, there it is. The album’s best guitar solo that shreds all others and leads up to the calm instrumental ending.

The beginning of â€œConfessionsâ€ is … interesting. Is it the beginning of â€œThrillerâ€? This track is straight out of a horror movie. However, once the lyrics start, it all comes together in a dark song with some apparent deep seeded anger or despair.

â€œNever Say Neverâ€ is a ballad straight out of the 90s hair band era. The one thing this song does for the band is show their diversity. As much as you maybe donâ€™t want to hear the softer side of a metal band, here it is. Donâ€™t go away just yet because the final track, â€œMetalheads,â€ will bring it all back to where we started; guitar riffs and Tomasz Nachyla playing at supersonic speed, something that will get the heart racing once again.

While the band lists a number of metal icons as influencers of their music, their own twists and flavor cannot be denied. For a band that has only played together since 2011 and has replaced a couple of members along the way, their sound is uniquely theirs. Scream Maker has done a terrific job of taking influences from the aforementioned legends and come up with their own sound. Living in the Past is a fantastic album both musically and lyrically.

Listen for yourself: Scream Maker – Livin in the Past 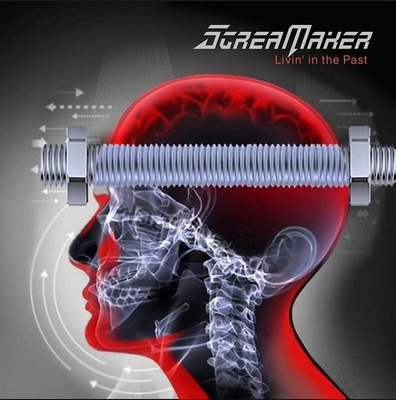