With Beyond Thule, Blue Snaggletooth shows us all that they can play more rock than this world can hold.

Beyond Thule is the second coming of Blue Snaggletooth. After their first album, Dimension Thule, the line up was completely revamped. With guitarist/vocalist, Chris Taylor still at the helm, the band now includes Casey Oâ€™Ryan (guitar), Joe Kupiec (bass), and Mike Popovich (drums). Old fans may think such a radical change would signal a change in sound and direction, yet the new line up truly goes beyond by breaking out big bushy guitars, dense sturdy bass, and razor edge drums. Add in a higher quality mix with breadth and clear definition, and you have a release that transcends their earlier work.

Calling this stoner rock would be the easy classification, as the listener is reminded of works by Fu Manchu, The Sword, Kyuss, and Orange Goblin, with hints of 7 Seconds or the Dwarves. But, there really is no need to take the easy road here.

Blue Snaggletooth boils and ferments their brand of rock into a sumptuous brew that gets better with every sip. â€œSleeping Mountainâ€ and â€œSerpent And The Kingâ€ roll with fat riffs blazing in high-watt electric glory. Drum work on each of these tunes is explosive with great breaks and fills.

â€œGawkersâ€ grinds you down with the weight of a ten-ton truck as Chris tells the story of a late night accident and the fears so many of us have of a rendezvous with the police. The guitar solo paints a disturbing picture of the dread that can consume.

â€œAll You Seeâ€ and â€œAhamkaraâ€ probe philosophical notions, using sweet grooving rhythms and solos, to caress your soul. The psychic energy is especially present on the doom laden bass lines that envelope the cosmic guitar solo in â€œAhamkaraâ€. Every song on Beyond Thule brims with personality making for captivating listening.

Beyond Thule concludes with the flailing and smashing â€œTransmutationâ€, which knocks you up side the head to get you ready to queue up this great album for another spin. 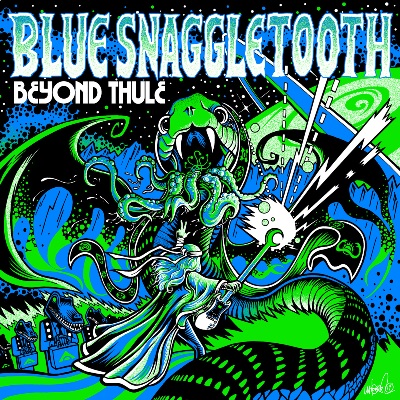