Very few artists can get recognized by a simple, single name. There are exceptions for sure: Prince, Madonna, and of course Lemmy of MotÃ¶rhead.

In case you’ve never played Tony Hawk III, listened to hard rock radio in the last forty years, or read a certain women’s advice column, it is possible you may not knowÂ MotÃ¶rhead,Â one of the first bands in the New Wave of British Heavy Metal. For those in the know, MotÃ¶rheadÂ has a new offering for the masses.Â The newest album, Bad Magic, was released on Aug 28, 2015, on the UDR Music label. It marks the band’s 22nd studio album and was released and is available as an MP3, CD, or 180 Gram Black Vinyl record.

The album was produced at NRG Studios in Los Angeles, CA with long-time producer Cameron Webb. Bad Magic came together after a couple of years which saw MotÃ¶rhead enjoy a resurgence of popularity. AftershockÂ includes 13 tracks with a combined run time of about forty-five minutes. At first listen, many casual fans may think it’s more of the same– a repeat of such hits like “Ace of Spades” — causing them to dismiss the album without much thought. 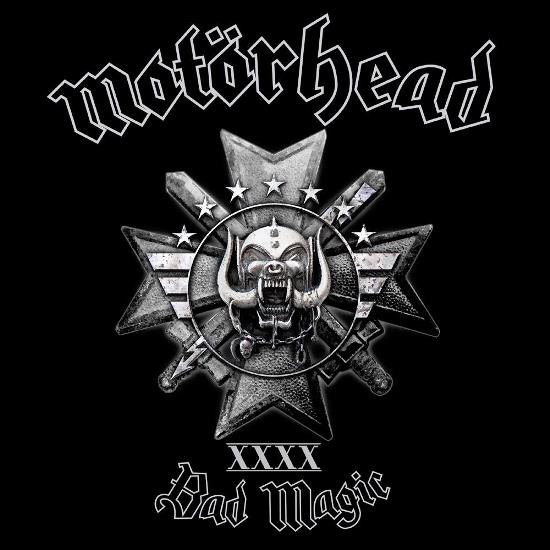 However, after giving the album another listen (or three), the subtle differences in this offering start to become apparent. Recently, in an almost unheard of incident, Lemmy had to stop a show due to sickness. In some way, this plays into the styling of the songs on this album. Unlike previous works, MotÃ¶rhead does not attempt to blow your ear drums out. Such an album is unusual for a band whose appeal is being in your face all of the time. However, for this record, the lyrics needed a bit more attention paid to them.

In a sort of backward approach, the cover is the first song we’ll discuss. “Sympathy for the Devil” was originally written by Jagger/Richards and is a bit of a stretch from the normalÂ MotÃ¶rhead comfort zone. The effort put into this cover by a three-piece band is amazing. The gravel in Lemmy’s vocals adds a dimension that other attempts to improve on this song simply could never reach. While the song has already been used in movies before, this version would be perfect for a Sin City 3 or another similar movie genre.

While there are songs that many other reviews might cover, the other one that we’ll touch on in this piece is “Shoot Out All of Your Lights.” It is the seminal MotÃ¶rhead songÂ from this albumÂ for new generations of rock and metal, in our humble opinion. The drum intro alone shows Mikkey hasn’t lost a beat off of a demanding pace. Phil’s play on the six-string gives the classic sound of the band but with a pressing need to go faster and faster. Lemmy is simply Lemmy on bass and giving the lyrics of this well-written album life.

Written and recorded in the studio together, for the first time in the Kilmister/Campbell/Dee era, the more “live” approach to creating Bad Magic has paid off and is another gem for the Snaggletooth.

MotÃ¶rheadâ€™s 40th Anniversary European Winter tour will start on Nov 15, 2015, at Le Zenith in Paris, ending on Dec 06, 2015 at the Hartwell Arena in Helsinki, Finland. More dates will be announced soon, so keep checking the bandâ€™s official website for up to the minute announcements.

Lemmy and the others even enjoyed a guest appearance from Queenâ€™s Brian May on â€œThe Devil,â€ adding a classic May solo on this track. If you don’t have this album let, and you’re a fan, don’t put it off. If you need more incentive, then we’ll give you a hint. The track, “Till the End,” is fantastic and is as polished as you’ll ever hear Lemmy.

The current line-up of Ian “Lemmy” Kilmister (vocals, bass), Phil “WizzÃ¶” Campbell (guitar), and Mikkey Dee (drums) has been together since 1992.

Let us know what you think in the comments below, and the same deal if you’ve seen them live this year. Enjoy the record.