Bad Habit is the long-awaited debut album from Welsh rockers Beth Blade And The Beautiful Disasters.

Bad Habit follows on from the band’s previous EP, Sick Like This, and is a great step forward. The record has been crowd-funded and independently released, a sign that hard work can pay off. 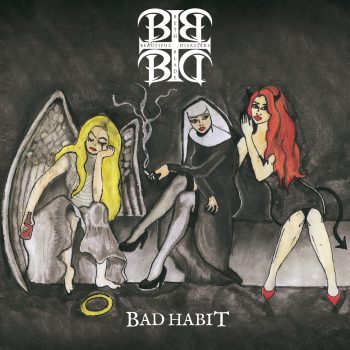 Released through a PledgeMusic campaign, Bad Habit was engineered, produced and mixed by Nick Brine (The Darkness, Thunder, Bruce Springsteen and more) and mastered by Pete Maher, (The Rolling Stones, U2, Thunder). It was recorded in just six days split between the legendary Rockfield Studios and Leeders Vale Studios in South Wales.

The album kicks off with “Hell Yeah,” a song which really sets the scene for the rest of the record, it features some great vocals, blistering guitar and a solid rhythm foundation. The track has an almost anthemic quality and will inevitably be a popular live number.

The title track “Bad Habit” starts with some screaming vocals from Blade and you can’t help but bang your head to the songs up-tempo beat. The first single from the album, “Beautiful Disease” follows and yet again much like “Hell Yeah” it’s another infectious rocking number which is destined to be a fan favourite.

“Down And Dirty” is more of a melodic number, with dirty undertones which perfectly accompany the song’s lyrics. On the other hand “Poster Girl For Pain” starts slowly, which helps to illustrate the darker lyrics portrayed in the song. It could easily feature on a movie soundtrack, such is the imagery conjured up by the number. “This Bitch Bites” could well be the opposite side of the last track, with it’s driving catchy beat below a contradicting lyric to the victim previously portrayed – it is certainly one of the songs of the album.

“Hell In High Heels” is another hard rocking number, with a subtle Kiss feel about it. It features some catchy guitar licks and lyrics to match. “If You’re Ready To Rock” takes us back to the 80s as Blade brings out her inner Joan Jett / Lita Ford to deliver another superb song.

“Angel With A Dirty Face” has a great guitar intro before Blade projects some deeply emotional lyrics, the end result being a fantastic mellow, laid back song. Bad Habit closes with an homage to many of the rock greats in the shape of “Legends Never Die.” The song references a who’s who of the band’s influences, with song titles mixed into the lyrics such as “Highway to Hell” and “Youth Gone Wild.” A fitting end to a fantastic debut.

Bad Habit features ten great songs and has been well put together and produced. The album is released on 3rd April 2017 and will be available across all digital platforms, as well as physical CD. The release will also be supported by numerous tour dates. Please visit the band’s Facebook page or official website for details.