The much-anticipated album of the reunited band is finally here.

The self-titled fifth studio album Asking Alexandria from Asking Alexandria marks the return of fan favorite, Danny Worsnop, to vocals.  Produced by Matthew Good this album has a lot to live up to with the last three albums debuting at number nine or higher on the Billboard charts.  This is a solid rock album from start to finish.  It is very diverse in the songs and Asking Alexandria clearly have decided to try some new things with this album, and they work.

To begin with, Worsnop’s vocals have never sounded better. They are strong and powerful, and if you are familiar with the prior work of the band you are sure to say “wow” at certain points when listening to him sing.  Musically this is solid. It is classic Asking Alexandria with dual guitars and strong riffs that are certain to get the crowds going when played live.  The electronic elements for the tracks meld in seamlessly and create an overall unique sound. 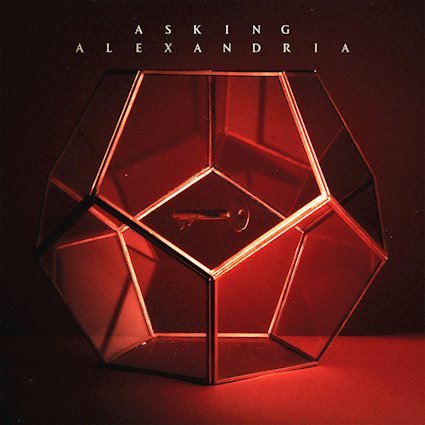 The first track “Alone in a Room” is a strong way to open the album.  The song brings to mind other bands like Avenged Sevenfold.  It is a melodic, fast-paced song that has a memorable hook.  From there, the album flows into “Into the Fire,” which is the first video released from this album.  This song is guaranteed to be a fan favorite when played live. The aggressive, almost growling vocal gives the song a harder edge.  The journey continues on through other notable tracks, like “Rise Up.”  The message in this song is sure to resonate with the listener.  The line “I found my soul in the darkest part of my mind” is sure to connect with fans of all ages on a deeper level.  It is things like that, a lyric or a riff, throughout the album that are sure to speak to the listener and evoke feelings or memories for them.

From this point on there are some real surprises on the album which is definitely a good thing.  “Vultures” is an acoustic song that is hauntingly beautiful and emotional.  This is one place where Worsnop’s vocals really shine. Between that and the emotion, the song really delivers.  “I Am One” has an opening that reminds you of classic New York Punk Rock before it transitions into a straight up rock song.  The most unique track has to come from “Empire” which features guest vocals by Bingx rapping.  Mixing rap and rock is not a unique concept but there is something different about this approach, perhaps it is because it is very unexpected from Asking Alexandria.  The album ends strong with “Room 138” a high energy powerful song that makes the listener want to start the album over and listen to it again.

The music is classic Asking Alexandria with some interesting twists which show the growth of this band.  The guitars of Ben Bruce and Camron Liddle play off each other while Sam Bettley’s bass and James Cassells’ drums provide a powerful beat that carries through the album.  Musically it is strong and definitely unique.  This album on Sumerian Records marks their fifth studio release so there is no arguing their staying power and popularity.  They have shared the stage with many big names in the hard rock, rock, and metal scene.  They are about to embark on a co-headlining tour with Black Veil Brides and this album is guaranteed to be on the setlist which the fans will appreciate.  It takes the best of the prior albums and adds some new twists.

The album is released on December 15 and can be pre-ordered here.