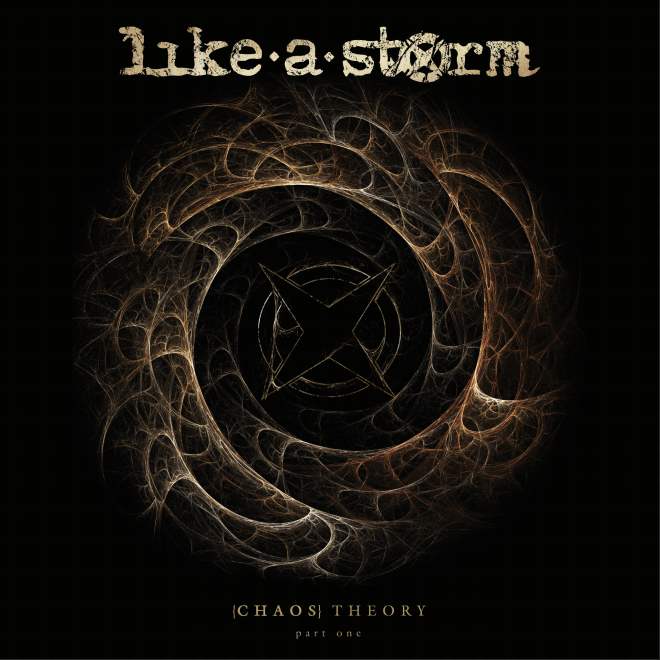 Originally released in 2012 on indie label, Fatal Records, Like A Storm have recently reissued Chaos Theory: Part 1 on Warner Music in their home country of New Zealand. These guys have made a major splash in the music industry and have quickly become a driving force in today’s music world.

Making the jump from an indie label to a major label was inevitable.

The band consists of three brothers; Chris Brooks (vocals, didgeridoo), Matt Brooks (guitars, vocals), and Kent Brooks (bass, keyboards, vocals). Combining a mixture of melody, aggression, and harmony along with their triple vocal attack, Like A Stormâ€™s sound has been described as dark, yet uplifting.

The name, Like A Storm, comes from a line of one of their earlier songs. According to Matt, they felt the name really captured the vibe of the band and the kind of music that they love to play; larger than life and epic! The storm metaphor also speaks to the range of music that they play. From hard-hitting rock to more melodic and atmospheric songs, a storm can be both aggressive and beautiful at the same time.

The band initially intended to record the album in a typical US studio. However, due to their insane touring schedule, the band decided to instead make the record while out on the road. Because of this, the album was recorded in backstage rooms and hotels all across the US. They have proven to be a very determined and hardworking band. As a result of their efforts, they have received an overwhelming fan response over the past few years.

A prime example of this is how the band would wheel two carts full of recording equipment into their hotel rooms every night after every show asking the hotel staff to put them as far away from other guests as possible.  Now that’s dedication.

What might be considered a logistical nightmare to others, recording an album while out on a nationwide US tour, turned out to be a huge positive for the band.  According to Matt, walking offstage every night and going straight into making the album, enabled the band to capture all the energy from their live show.

Recording outside of the constraints of a traditional studio environment also gave Like A Storm the freedom to realize their ambitious vision;  an album where hard rock contrasts haunting acoustics and progressive metal that collides with the primal tones of the didgeridoo, all while retaining the powerfully meaningful lyrics the band is known for.

Matt says the idea for the album’s title speaks to the highs and lows of being in a rock band; the adventure, the excitement, the chaos, and making sense of it all.

The album starts out with Six Feet Under. The tune is hard and heavy and lets the listener know, right away, they are in for a hell of a ride! The vocals are strong, loud, and demand your attention.  However, they are sung clear and precise so you understand every word. The song is about not giving up. When others think they have gotten the best of you, you fight back letting them know they wonâ€™t bury you… six feet under. This song sets the pace for the rest of the album to follow.

Never Surrender is another heavy tune where Mattâ€™s guitar soars over Chrisâ€™s anthemic vocals. Similar to Six Feet Under, this song tells a story about not letting people put walls up in your way; about not letting what people say about you affect you. I canâ€™t help but pump my fist in the air as I sing along to the chorus, “No, I will never surrender. No, I will fight forever. No, there is no turning back from here. I will never surrender.”

Next up is a remake of the Coolio song, Gansterâ€™s Paradise. The band does the song justice and adds a little humor to their album.

Break Free is a wonderful, stripped down, almost acoustic sounding ballad with excellent vocal harmonies. This soulful sounding, passionate song is a highlight for me. The textured music compliments the highly emotional vocals well. This song is about falling deep within yourself and having a hard time trying to dig your way out. About wanting to “Break free from everything. Break free before it breaks me.”

The adrenaline fueled, Love The Way You Hate Me, is my favorite track on the album. It’s hard, heavy, and aggressive.  Despite this, it somehow still manages to mix in the wonderful sound of the didgeridoo during the breakdown, without sounding out of place.  Although other bands such as Test Department and Jamiroquai have had some success using the didgeridoo, Like A Storm is the first band in their genre to incorporate it as a regular part of their band. These guys have definitely found their niche. The song debuted at #6 on the Rock FM, New Zealand and #16 in the New Zealand Singles charts.

The next track, Southern Skies, slows the pace back down. It is a beautiful ballad built around the soft sound of the keyboards. Here are some extremely vulnerable vocals which offer up a set of personal lyrics. No matter how far away from New Zealand these brothers are, they will always have their ‘Southern Skies’ to go back to. The exact place where everything they were looking for and everything they thought they had lost they were able to find in the exact place where they belong; their Southern Skies.

With Nothing Remains (NIHIL Reliquum), the album ends with a perfect blend of both the heavy side and soft side of the band. With its rhythmic guitars, it almost puts you in a trance. Blended into the song is some narration of which I am not sure where from. It does add an interesting mix to the song. It is about the end of a relationship where you canâ€™t believe it’s over and feel you are nothing without that other person.

Chaos Theory: Part 1, produced by the multi-instrumentalist Brooks brothers, has been widely regarded as a huge step forward for the band. The album has already yielded two successful singles; Never Surrender (voted Song of the Year by Mid-Atlantic Rock Review), and their latest hard rock anthem Love The Way You Hate Me (which hit #1 on SiriusXM Octane).

Ironically, the chart-climbing Love The Way You Hate Me was never intended to be a single. Surprised by its recent success, Chris says they honestly never thought it would make it to radio. They thought of it as this heavy song that would be a great one to play live. They even put this long didgeridoo breakdown in the middle of it which, Chris says, they thought would probably stop any station from ever playing it. But after Flint, Michigan rock radio station 101.5FM The Banana unexpectedly spun the song one night on their Cockfight song competition, listeners responded overwhelmingly. The song went on to win every night for over a month until it was retired from the competition, shattering the stationâ€™s existing record.

Like A Stormâ€™s diehard fans (many of whom are inked in the bandâ€™s artwork and lyrics) are widely known to travel huge distances, and show up hours early, to see the band play at some of the most iconic rock venues in the US.

Chaos Theory: Part 1 is currently the #1 selling album for the first week of sales in New Zealand (beating out Pharrell, Lorde, Beck, Skrillex, The Pretty Reckless, and Bruno Mars,among others). With their record-breaking new single, Love The Way You Hate Me, smashing its way onto American airwaves, Kiwi rockers, Like A Storm, have now achieved more successful US Hard Rock singles than any other New Zealand band in history.  With its unique musical statement, Love The Way You Hate Me, is grabbing the attention of rock fans all over North America. 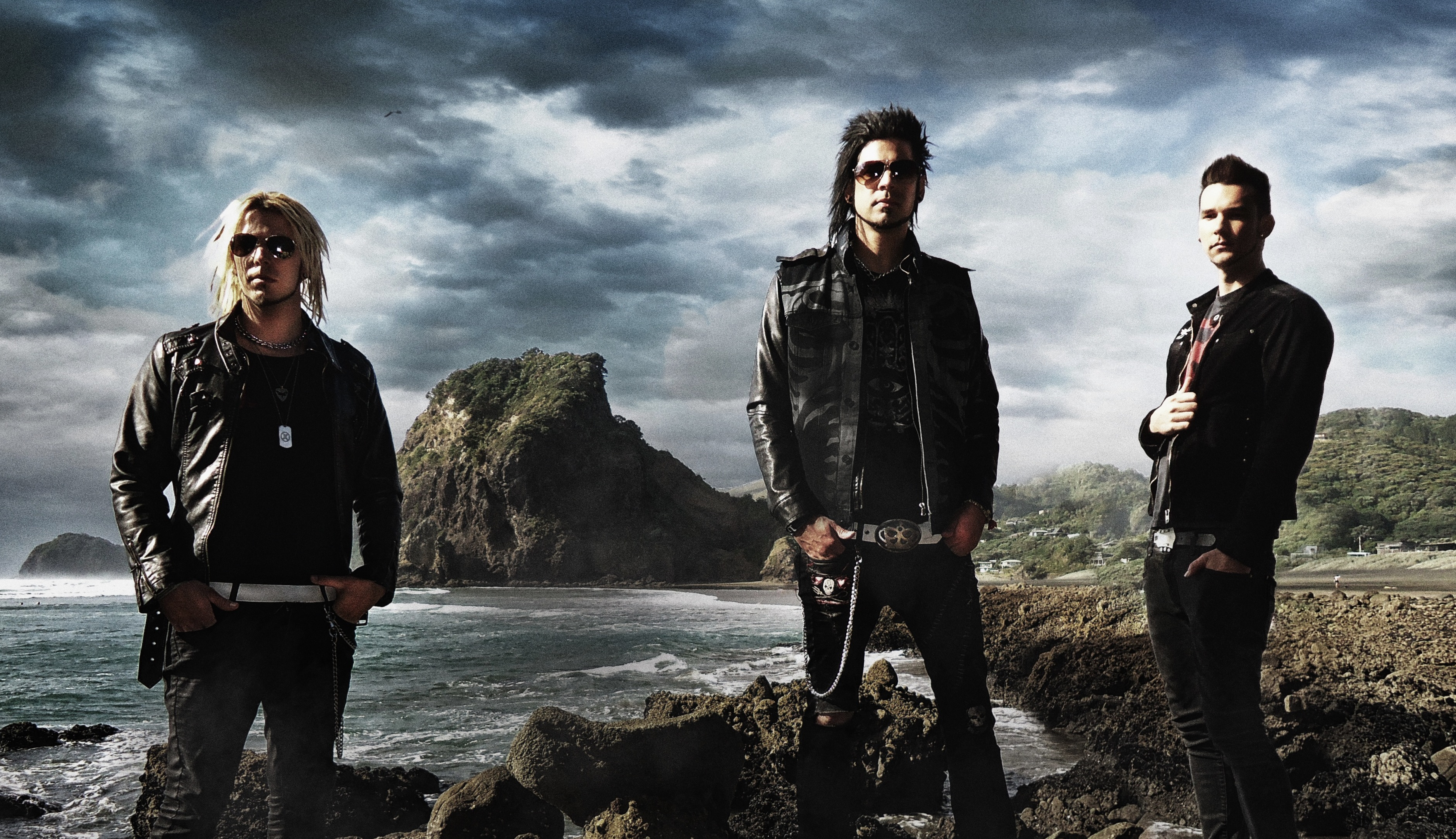